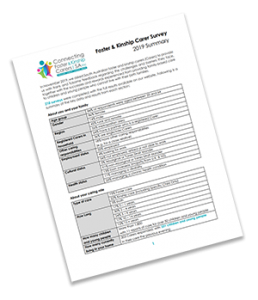 Over a quarter of respondents to the 2019 CF&KC-SA Carer’s Survey have reported positive changes as a result of child protection reforms.

The gains reported included, “I can now go to the annual reviews”, “we are now entitled to a copy of the case plan for each child” and “[improvement in] post 18 support”.

More that one fifth said that ‘maybe’ they had seen improvements while over half had noticed no improvements.

The same mixed results were repeated elsewhere in areas such as information and understanding of the system, supports and key relationships.

The overwhelming majority of carers remained strongly committed to their caring role and over nine out of ten felt that they had established a strong family-type bond with those in their care.

Around half of the survey respondents felt happy with the relationship with their DCP worker and the information they provided but others were less so and comments indicated that there was still some work to be done on this important relationship.

Our thanks to the 210 families that responded to the survey.

There are no upcoming events at this time.